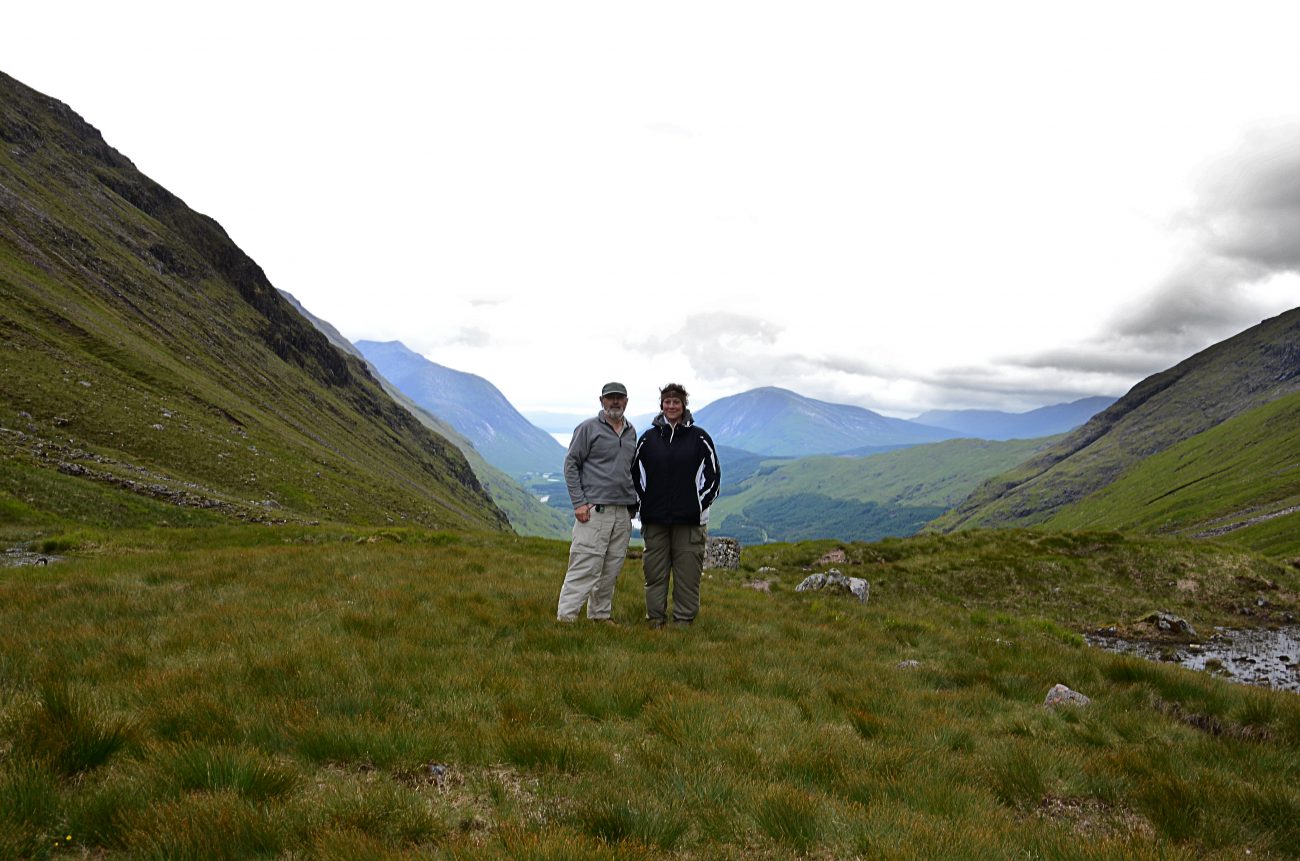 First thing we said our goodbyes to Uncle Keith and set off to Glen Coe. We had a minor problem with the trip – we kept stopping at different places to take in the scenery. At Achallader as I walked away from the car I noticed a huge scrape and dent in the passenger’s side sill. That’s our £600 deductible gone. It put me in a foul mood and to make matters worse we had no idea when I’d hit something.

We finally arrived at Glen Coe around three pm and the place was crawling with tourists. The parking area nearest to the Lost Valley clearly stated that no overnight parking was allowed. We didn’t want to hike a couple of miles along the busy road just to get to the start of a hike which begins with over a 900 ft climb. Between tourist coaches I tried asking a Scottish Piper if he knew if the no parking rule was enforced. He didn’t know, in fact he wasn’t Scottish – I think he was Ukrainian. I was now in an exceptionally foul mood, as we had no back up plan for where to stay for the night. In the end we backtracked to an earlier parking place, which linked to a public footpath to Glen Etive. From the maps it looked like a reasonable hike of around 4 miles with an opportunity for wild camping in the Glen.

Following the public footpath up Lairig Gartain we got a taste of things to come – peat bog. The ground was very wet and very soft, but no worries as the path was good and dry. About two third of the way up to the saddle we met some very tired Girl Guides coming down, that should have warned us. We arrived at the saddle a 740 ft climb about six thirty. We now had to decided whether to go on or go back – not that many camping places had presented themselves on the way up and the saddle itself was windy and uninviting. Ginger checked the map and said that the descent was only 500 ft, so we decided to carry on.

Before we descended into Glen Etive We took a few pictures to celebrate – later I discovered that the best of mine were spoiled by an autofocus error – so today’s picture isn’t the one I’d have picked but we’re all blurred in the better exposed & framed picture.

The path, which was good at the start of the hike, had been getting progressively worse the higher we got. Going down the other side it became very rough. I stumbled once and fell over. Further down the going got wet, and my Huaraches, great on rock and rough surfaces, proved to be inadequate on wet grass. I fell once more and broke my hiking pole. We had a long talk about the merits of retracing our steps or continuing. Ginger, used to reading maps with contours in feet realised that she’d mis-read the map, we were descending 500 metres, around 1,500 feet! We decided to carry on. At the bottom of the valley the trail petered out in a boggy mess, where I proceeded to slip over several times. Somewhere along with the dented car, the problems parking, my broken hiking pole, and now a wet backside, I totally lost my sense of humour.

We finally made it to the road and we headed towards a small larch wood where we camped for the night. On the way we encountered a very fine stag laying, apparently completely unharmed and disinterested at the side of the road.

Setting up our tent the midges were out in strength and we were very pleased that we’d bought head nets earlier. Over dinner we discussed the possibilities for the next day, continue with our plan to return by crossing over the next valley, or take the long route (10 miles) and hike out via the road. We decided to sleep on it and see how we felt in the morning.